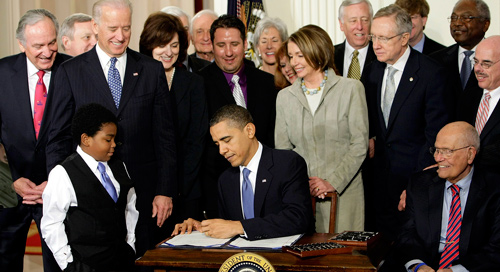 (My tortured-but-thankfully-short journey into the world of ACA healthcare coverage!)

My COBRA healthcare coverage ended today. In anticipation of the worrisome period afterward, I’ve been working hard to procure coverage through Covered California, the California wing of the Affordable Care Act (ACA). In fact, it’s been quite an unexpected ordeal. I’ve always been an avid supporter of the President’s desire to make healthcare insurance obtainable for the masses. But honestly, the nuts and bolts of this law, as it has been cobbled together, leave a lot to be desired.

I finally got coverage that will start on April 1. (Until that time, I’m covered for all basic medical emergencies via Medi-Cal.) It took the help of 3 people in the SF Medi-Cal office, and countless hours online and on the phone to make this happen. Therein lies the problem.

The ACA is patchwork of compromises that were made to placate all sides in the health care debate. We’d like to believe that compromise means the final product will fulfill the needs of all parties. In practice, especially for government programs such as this, compromise means that “desired pieces” are disjointly combined to appease all sides. This creates an unsatisfying patchwork for all.

As a self-employed worker, I have no guaranteed source of income (meaning $0 until proven otherwise). In the ACA’s eyes, that means you are Medi-Cal eligible only. Medi-Cal offers free medical coverage, and is compliant in every way with all other ACA medical plans. Most might think it a great thing to have free health care… until you realize that it’s extremely limited in physician access if not actual benefits.

If you want to decline Medi-Cal and pay for coverage options, you have to pay the unsubsidized price of the offered plans. For example, a Bronze plan costing $410/month that someone can receive for $10 because of their $20k salary, will cost you the full $410. No proof of projected income mean you have no options. It’s Medi-Cal or Bust!

Actually, though this is what I was told initially, it’s only partially true. You are allowed to project a yearly income amount in order to qualify for subsidies. But there’s a catch. If you fail to make over the $15.8k  income cutoff, you are liable for repayment of the subsidized amount of your coverage. In simple terms, if you don’t make enough money to be slightly better off than poor, you will owe the government thousands for the subsidized coverage you  received.

It seems to me that the law is designed so that, if you don’t have a “traditional” job, you can only receive Medi-Cal or nothing at all. THAT’s not healthcare! And paying for unsubsidized plans isn’t “affordable” option by any stretch of the imagination.  At least my story ends well. I’ve heard of many stories that don’t.

A large part of the problem also lies with the website: coveredca.com. When it rolled out late in 2013, and there were huge issues with healthcare.gov, we were told that the CA site was fine: working great and with no problems.  That was a lie, of course.

Basic user experience practices were absent, info had to be re-entered on virtually every page, and there was no way to see what plans were available without actually filling out an application. (This is what led to my mistaken-but-ok Medi-Cal coverage.) The site is slightly better these days, but has been under maintenance on and off for the past 3 weeks.

I sat beside a wonderful woman who helped me cross the finish line for my coverage, and watched with amazement how she re-entered information multiple times only to have the website accept bits and pieces with each submission. When you call in for help on those occasions when the site is down, please know that they  understand  and feel your pain, because they do.

The issues aren’t just relegated to coverage eligibility and site access. There are also issues with the offered plans themselves. My primary care physician, one that I’ve had for years and don’t want to lose, only accepts HealthNet. A conversation with his billing office revealed that it’s one of the easiest ACA plans for doctors to accept (which isn’t saying much). For that ease, enrollees like myself must pay almost twice the subsidized amount of similiar plans from Anthem Blue Cross and Blue Shield of CA.

What his means is that “ease” for the doctors means “higher cost” for the patients. So even though the subsidized amount I’ll be paying is still a 50% savings over my just-lapsed Cobra coverage ($305 – high deductible coverage), it’s not the savings you might think. The Cobra coverage included dental and vision plans: my April 1 plan does not. And given the high cost of the HealthNet plan in comparison to the others, I still worry about the ramifications of having to potentially pay back money if my 2014 earnings aren’t great enough.

I never imagined myself to be a Single Payer plan advocate, but this experience has made me a believer. If we are going to make health care affordable to all, there can be no loopholes, no hidden costs, and no large groups of people falling through the cracks. I haven’t fallen through the crack, but I’m hovering over it until I get steady work. And isn’t that what the ACA was supposed to help alleviate?

The one huge positive in this ordeal has been the great work of the Medi-Cal employees who helped me solidify my post-Cobra transition, and get my final coverage. They helped me via email and phone, with very little delay, and with large amounts of patience and humor. I can’t imagine doing what they were able to achieve on my own. It’s easy to get frustrated in this new medical reality. But we must  remember that the humans on the other end of the phone (when you call in – because you will call in, trust me) really do want to help us all, if they can.

If this program succeeds, we’ll all succeed. After it does, I hope to God they fix the crap parts of it as quickly as possible!